Click on the map below to go to an interactive map to search for what division you reside in: 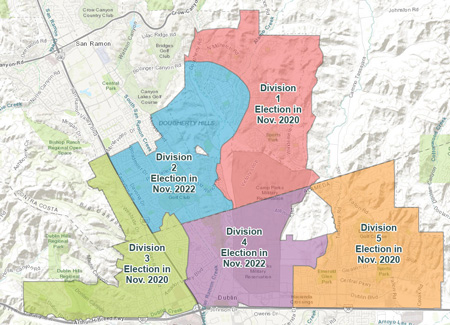 The Dublin San Ramon Services District transitioned in 2019 from an at-large election system to an area-based election system, under the California Voting Rights Act. Along with the City of San Ramon, San Ramon Valley Unified School District, San Ramon Valley Fire Protection District, and the Town of Danville, DSRSD received a demand letter dated Nov. 5, 2018, from Walnut Creek-based attorney Scott Rafferty, representing the Bay Area Voting Rights Initiative and demanding DSRSD change its current at-large election system to an area-based election system. Previously, all five members of the Board of Directors were chosen by constituents from the District’s entire service area. Under area-based elections, DSRSD has been divided into five separate election areas, referred to as "divisions," and voters residing in each individual area select one representative to serve on the Board.


At the Jan. 15, 2019, meeting, the DSRSD Board adopted a resolution of intent to transition from an at-large to an area-based election system. DSRSD held four public hearings to give community members an opportunity to participate in the process.

On April 2, the Board voted to accept the Scarlet Plan and determined sequencing of Districts 1, 3, and 5 for the 2020 election and Districts 2 and 4 for the 2022 election. An ordinance for adopting the proposed plan was introduced on April 16 and May 7.


Info and documents used during the transition process from January to May 2019:

These tools were available prior to the four public hearings for community review and use:

Additional items that were available for public review:

View PDF of demographer's presentation to the Board from March 19, 2019.

Meetings held for the public to give input on draft maps and proposed sequence of elections:

The Board considered an introduction of an ordinance establishing area-based elections:

The Board of Directors adopted the ordinance establishing area-based elections: