TAP WATER IS SAFE TO DRINK BECAUSE WE ARE ALWAYS PROVIDING ESSENTIAL SERVICES.

Lake Oroville Stores Most of Our Water 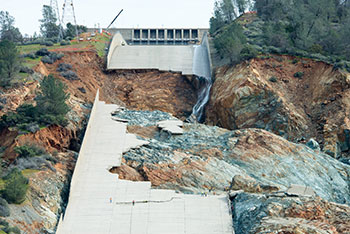 Photo: Click on the image to view a series of amazing videos (posted on www.imgur.com) capturing the Oroville spillway incident that began February 7, 2017. Photo courtesy of California Department of Water Resources.

The February 2017 images of the damaged spillway at Oroville Dam were mesmerizing and sobering. Although it's 160 miles from the Tri-Valley, Lake Oroville is a critical part of our water system.

For updates on the Oroville spillway repairs, visit the California Department of Water Resources news site and YouTube channel.

160-Mile Journey to the Tri-Valley 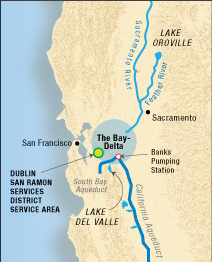 Map: Water from Lake Oroville travels via rivers, the Delta, and State Water Project aqueducts to DSRSD and other Tri-Valley water agencies.

Our water’s journey starts in the northern Sierra Nevada as rain and melting snow flowing into Lake Oroville. Through California’s long, dry summer, the water is released gradually through the dam’s hydroelectric generating plants. It flows into the Feather River, down the Sacramento River, and through the Delta. Near Tracy, the Banks Pumping Station pumps the water into the 444-mile long California Aqueduct. Some of this water is diverted into the South Bay Aqueduct; the rest continues south to supply Central Valley farms and southern California cities.

Zone 7 carefully manages the amount of water it stores, imports, treats, and delivers to DSRSD, Pleasanton, Livermore, and California Water Service-Livermore. A key responsibility is releasing some of the imported water into local arroyos and lakes to recharge the groundwater stored under our valley. Groundwater is a vital local water bank. When State Water Project allocations were severely restricted in the 2014-15 drought, most of our water came from groundwater.

DSRSD purchases all of its potable (drinkable) water from Zone 7 and delivers it to 20,000 water customers in Dublin and the Dougherty Valley area of San Ramon. After it’s used, about 75 percent of this water is cleaned and released into the San Francisco Bay. But the rest--25 percent--is recycled into irrigation water, reducing the amount of water that must make the long journey from Oroville to our taps.