Situation: Based on population projections, DSRSD planned its Regional Wastewater Treatment Facility with four anaerobic digesters to decompose organic solids. The District built three digesters between 1961 and 2003 and had nearly completed designing the fourth by 2010. Then recession and drought slowed growth, which decreased wastewater volume, and DSRSD put the project on the shelf. By 2016, it was clear the solids “load” coming into the treatment plant was rising even though overall wastewater volume was stable. It was time to move forward with digester number 4.

Solution: Construction began in August 2017 and will take a year to complete. The four digesters will process 2.2 million gallons of solids, enough to serve expected growth in wastewater volume through 2035. In the near term, this added capacity will be essential to performing scheduled maintenance and unexpected repairs without affecting operations.

For example, within two years, digester number 3 will be taken offline for cleaning, a task that takes two to three weeks and is done every five to seven years. Digester number 4, which is approximately equal in size to digester number 3, will be up and running in time to absorb the load.

Photo: Three anaerobic digesters at the DSRSD wastewater treatment plant break down solids and produce biogas to generate electricity and heat. DSRSD is building a fourth digester to keep up with growth and provide redundant capacity for maintenance, and a grease receiving station to increase biogas production. 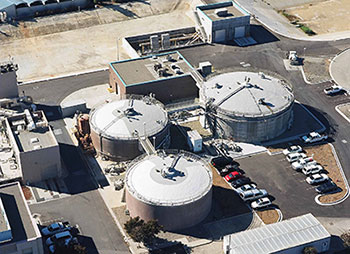 Digesters work like mechanical stomachs, providing a warm, oxygen-free environment where bacteria decompose the organic solids in wastewater and destroy pathogens. The process produces biogas, a renewable fuel DSRSD captures and uses to generate electricity and heat to power the plant.

Biogas currently generates about 20 percent of the energy used at the treatment plant, reducing energy costs by about $800,000 a year. To potentially save an additional $100,000 to $200,000 per year, the District is building a receiving station for cooking oil and grease at the same time as the new digester.

Adding waste kitchen grease helps digester bacteria break down solids more efficiently and produce more biogas. The receiving station also will provide a local disposal option for companies that pick up grease trap waste from restaurants. The grease will be recovered and reused instead of trucked to landfills. Waste haulers will pay the District a fee each time them dump grease at the receiving station (referred to as a tipping fee). DSRSD will use those fees to offset operating costs.

The combined cost of the digester and grease receiving station is budgeted at $13.1 million. Fees collected from developers for infrastructure expansion are funding about 90 percent of the cost. The remaining 10 percent of the cost is funded by ratepayers.