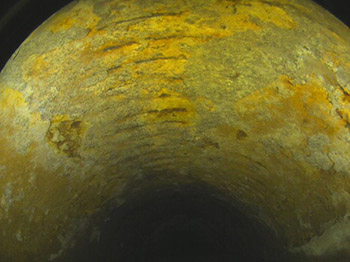 Photo: Sulfides in wastewater caused significant corrosion (dark yellow patches) to the interior of the Dublin trunk sewer, exposing reinforcing steel in some locations. DSRSD rehabilitated the 57-year-old pipe in the summer of 2017.

Situation: DSRSD needed to rehabilitate 8,000 feet of a major sewer pipeline that runs under a busy commercial zone on Village Parkway in Dublin. Installed in 1960, the Dublin trunk sewer was nearing the end of its useful life. Sulfides in the wastewater were flaking away the pipe's interior concrete surface.

Solution: The 33- to 42-inch diameter pipe is buried 15 feet underground and carries about half of the District’s wastewater to the treatment plant. To dig up and replace such a large pipe would have taken months, rather than weeks, and cost far more than the project’s $5.5 million price.

Instead, the District selected cure-in-place pipe (CIPP) rehabilitation. With CIPP technology, a specialty contractor sets up a temporary bypass pipeline to keep sewage flowing, then cleans the existing pipe and inserts a flexible liner, one section at a time through existing manholes. The liner bonds with the interior of the old pipe, adding 50 years to its expected life. 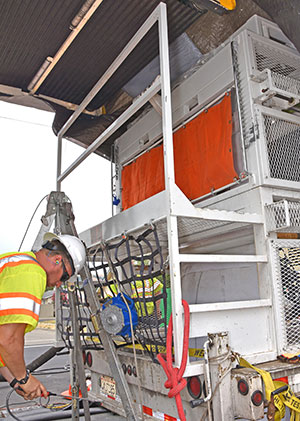 Photo: A worker monitors the cure-in-place pipe liner (gray fabric at top) as it is guided into the Dublin trunk sewer, a 50-year-old pipe that DSRSD rehabilitated in 2017. After insertion, steam pumped into the pipe will activate resins that bond the liner to the pipe.

Choosing an efficient route for the sewer bypass pipe with little or no trenching was key to the project’s success. If run through the Village Parkway commercial zone, the bypass pipe would have to be buried in shallow trenches. That would heavily impact local businesses and prolong both bypass installation and street refurbishment.

Fortunately, the project team was able to negotiate with Zone 7 Water Agency to route much of the bypass pipe along a Zone 7 stormwater channel that parallels Village Parkway.  Keeping nearly all bypass piping off of busy Village Parkway saved $1.2 million in construction costs.

Zone 7 initially ruled out using its channel for the bypass route. Record rainfall in early 2017 had damaged the channel’s banks and Zone 7 needed uninterrupted access to make repairs over the summer. However, the District’s contractors were able to work around Zone 7’s repair schedule while installing and removing the bypass pipe. Where access conflicts were inevitable, the contractor made the channel bank repairs for Zone 7.

The project also was carefully coordinated with City of Dublin Public Works to maintain traffic flows and street parking on Village Parkway and minimize nighttime noise near homes. The contractor worked a 24/7 schedule from June to August to finish the majority of Dublin construction before school started in the fall. Extensive outreach kept businesses and residents informed before and during construction.

“Our construction manager told me he has never been on a project site where residents were so nice about the temporary inconvenience of traffic controls and a sewer bypass line,” said Associate Civil Engineer, Jaclyn Yee, the project manager. “Early outreach made a big difference.”