TAP WATER IS SAFE TO DRINK BECAUSE WE ARE ALWAYS PROVIDING ESSENTIAL SERVICES. 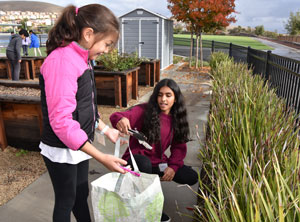 Picking up someone else’s litter has never been more exciting.

Fifth-graders at Amador Elementary School in Dublin are connecting with their local watershed through a program presented by KIDS for the BAY, an organization providing environmental education to elementary schools in Alameda and Contra Costa counties.

The goal for the Alamo Creek Watershed Action Program is to educate youth about their local watershed and inspire them to take an active role in keeping it clean. Fifth grade teacher Sarah Jawed said the program ties into the regular curriculum, and students have performed better on science quizzes since the program started.

“In elementary school, the students don’t really get a lot of hands-on experience,” Jawed said. “It’s helping them retain the information.”

In a series of classroom programs, 116 students have done “Estuary in a Bag” experiments, built a clay model demonstrating the mixing of freshwater and saltwater, investigated the anatomy of Dungeness crab and striped bass, and picked up litter from around school grounds so rain doesn’t wash it into our waterways. 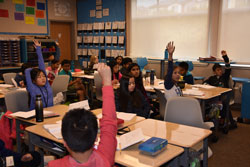 “They’re learning classroom subjects on a local level,” said Marianne Keith, program manager for KIDS for the BAY. “They’ve been super excited to learn this science.”

On a drizzly late November afternoon, kids partnered up and took turns picking up litter from a playground area and keeping a tally of what and how much was collected. While the school grounds were generally clear of trash, students were surprised by how many small bits of lunch wrappers and similar items could be found on the ground.

Student partners Sonia Gautam and Misha Nagrani said they like being able to improve the ecosystem for the animals that live in local creeks. “It makes me feel important,” Sonia said.

Empowering children to learn about their local watershed and how they can make a difference, the KIDS for the BAY program will also incorporate an assembly where fifth-graders present what they have learned to younger students. Participants in the Alamo Creek Watershed Action Program will also take a spring field trip to Sunol Regional Wilderness to investigate animals at Alameda Creek, which is part of the same watershed and leads to the San Francisco Bay.